With the new Spidey film in works, there has been a call for Donald Glover to audition. The debate has been whether Peter Parker/Spider-Man can be black...this whole debate kinda reminds me of todays issue.

After having one of Peter Parker Spidey bindle webs fall into Valerie's hands, she gets the idea to be a superhero! 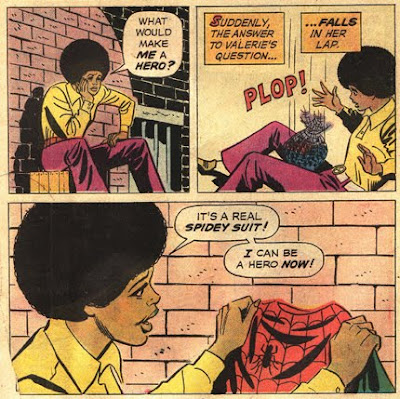 And after a few training sessions, The Sensational Spider-Woman is born! 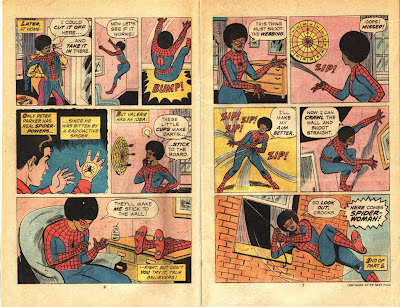 Spidey seems ok with this... 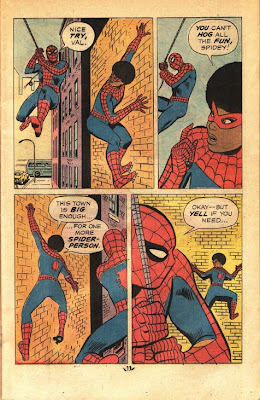 Then trouble strikes! The Vulture! Good thing Valerie is there! 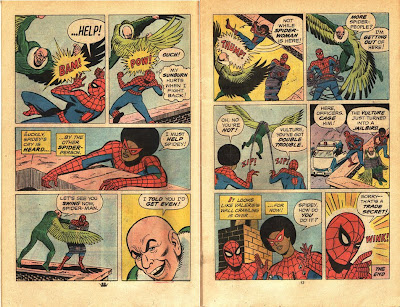 And after Valerie's wall suction cups fall off, Spider Woman is no more. The End?

This is a fascinating story. It has a black Spider-Woman, but the fact Valerie is black has no bearing on the story. Valerie's a down on her luck gal, who has her luck turn around when she dons the costume of Spider-Man. And then in the end, she returns to just Valerie, while the real Spider-Man continues his adventures.

This tale has certain elements that are surprisingly similar to the plight of Don Glover and his quest to don the mask of Spider-Man. He's wants to have some of the fun as it were, be a hero. And as much as internet fans photoshop him into the costume, at the end of the day, he'll most likely not be the next Spider-Man. But, unlike Valerie's story in this issue, where she did become Spider-Woman and happened to be black, Don Glover will not be Spider-Man because he is black.

Call me jaded, but the proofs in the pudding. Take for instance the up-and-coming movie The Last Airbender, where 3 of the 4 lead actors are white and are dressed to look Asian/Inuit. If Hollywood won't even cast Asians/Inuit to play originally intended Asian/Inuit characters, they sure as hell won't cast a Black actor to play a White Peter Parker/Spider-Man. (Note: I am not comparing skin colours, but actors to character roles).

But, I'm ambivalent on the issue. Part of me wouldn't want a black actor to be cast as Spider-Man because it would be a gimmick at best. However, another part says yes to a black Spider-Man because characters of such resonance shouldn't be determined by what colour their skin is. Another part of me says why should there be a black Spider-Man when they're are so many other great characters who were written as black. Then again, when I close my eyes and think of Spider-Man and other heroes I enjoy reading, they are always white; my own mind is "white washed" - maybe a simple change of colour could shakes things up for the better?

As a thought experiment on the debate, I photoshopped this image together. Sorry to J. Scott Campbell! 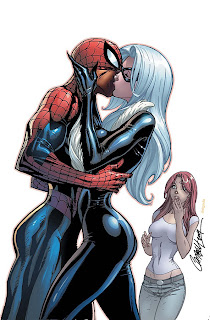 I don't know about you guys, but after looking at this image, I think a world of fresh, controversial, and exciting stories could be culled from making Peter Parker/Spider-Man black.

So I added this photo to a comic site and the responses I got were awful, and then it opened up the doors for really bad comments. I don't get it. This image wasn't created as a form of blackface. It's trying to imagine what a world would be like where Peter Parker/Spider-Man is black. And as the image suggests, just because Peter's black, doesn't mean his supporting cast would be black as well. I think that is what would be so awesome about a black Spider-Man - he'd tackle racial politics. So this image can be taken a number of ways. Is MJ shocked at Peter cheating, or is she shocked at a black man and a white woman kissing, or both? What exactly would happen if Spider-Man was black?

On a related note: Years ago I saw Joey Jeremiah (Pat Mastroianni) and Snake (Stefan Brogren) do a live show where they talked about their experiences growing up filming Degrassi. One of the stories that stood out was when Degrassi started airing down in the States, their biggest complaints they received weren't the episodes where they tackled child abuse, abortion, drugs, suicide, etc, but the episode where BLT (black) and Michelle (white) kissed. Wow. Living in Canada, where we embrace (or at least pretend to) our differences, I find this to be perplexing. Colour is just that - colour. It makes our world brighter, better, and beautiful.

So either people are offended by this rendition because it's photoshopped, or they immediately think it's a blackface, or they are offended at the potential racial politics therein. I don't know. Any thoughts?

Thanks for sharing! I had no idea this story existed, and I agree with you on a couple of your points. This was a pleasant surprise.